Skip to main content
Close Search
In the News

By Alan AckermanFebruary 24, 2022March 4th, 2022No Comments
This is a repost of a Legal News article on Matthew Ackerman joining the firm: 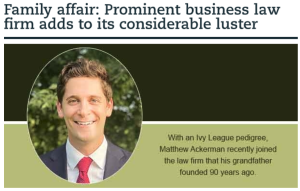 Attorney Matthew Ackerman (right) is pictured with U.S. Court of Appeals Judge Michael H. Park, for whom he clerked following law school. Ackerman considers Judge Park, a Princeton University grad and Yale Law School alum who was appointed to the appellate bench in 2019, “one of my legal mentors.”

Now in its 90th year, the Bloomfield Hills law firm of Ackerman & Ackerman, P.C. recently added another family rung to the legal ladder, much to the delight of its managing partner.

The firm, founded in 1931 by Irving Ackerman and guided for more than three decades by his son Alan, has gained a reputation as one of the premier eminent domain law firms in the nation, a fact almost certain to be heightened by the addition of Columbia Law School grad Matthew Ackerman.

“I grew up wanting to practice law with my dad, just like he did with his dad,” Matthew said. “That’s the reason I went to law school. I was eager to join the firm because it’s such an outstanding opportunity to learn a complex area of law from my dad, who is really an expert in all things eminent domain. We’re looking forward to this next phase, and growing the practice together.”

A product of Cranbrook High School, Matthew brings an impressive legal resume to the firm. At Columbia, a law school that counts President Franklin Delano Roosevelt and the late Supreme Court Justice Ruth Bader Ginsburg among its graduates, Ackerman served as the data and analytics editor on the Columbia Law Review, vice president of the Columbia Federalist Society, IT and library chairman on Student Senate, and as a teaching assistant for civil procedure and criminal law. For good measure, he was named a James Kent Scholar and was awarded the Ruth Bader Ginsburg Prize, which is presented annually to J.D. degree candidates who earned James Kent academic honors for outstanding scholastic achievement all three years of law school.

“Matthew brings common sense and stability to the firm, along with a whole lot of motivation to excel as a lawyer,” Alan Ackerman said. “He’s a phenomenal writer, he’s driven, and he gets things done.

He’s just the most disciplined person around. He’s got a lot of attributes I don’t have, so we’ll complement one another well.”

The elder Ackerman, who grew up in Detroit and graduated from Mumford High School, earned his juris doctor from the University of Michigan Law School in 1972 after earlier obtaining a master’s in industrial relations from Michigan State University. His father, Irving, was a Detroit College of Law grad, completing his law studies at the tender age of 19.

“He peddled newspapers growing up from the time he was 5 years old,” Ackerman said of his father, whose parents emigrated from Russia before the Bolshevik Revolution. “My dad was a real live wire. He was special.”

Ackerman joined his father’s law firm in 1972, joking that “he made me a partner so that he could cut my pay.” After earning his law degree, Ackerman harbored thoughts of attending medical school but opted against such a move after a heart-to-heart talk with this dad.

Instead, Ackerman began learning the ropes of eminent domain law from one of the early masters, his father, who died in 1999 at age 89.

“He had many legal triumphs over the course of his career,” Ackerman said of his father. “He believed in the importance of urban renewal, but he also fought against unnecessary destruction of neighborhoods by way of condemnation. He had his moments of great pride in changing the law in a very positive way.”

Like his father, Ackerman has made a habit of winning eminent domain cases for property owners, displaying the smarts, savvy, and stamina to do battle with governmental agencies and utility companies determined to convert private land for the public good.

His list of success stories is as long as some of his cases, one of which concluded more than a decade ago after a nearly 18-year legal journey. That case, the battle with the Michigan Department of Transportation over rightful compensation for a consortium of property owners affected by work on the M-5 highway corridor in Oakland County, was atypical for sure, Ackerman admitted. Yet, it also was indicative of the lengths that the managing partner will go in serving the needs of his clients, many of whom take on the persona of “David” in the battle with the “Goliath” of government.

After initially offering $1.4 million to property owners in the M-5 case, the MDOT agreed to a settlement of more than $18 million, according to Ackerman.

Now, with his son Matthew by his legal side, Ackerman said his “batteries are recharged” for the next chapter in the history of Ackerman & Ackerman PC.

“While more of our focus in recent years has been on complex business litigation, we still take pride in our history in helping property owners in eminent domain cases,” Ackerman said.

That legacy of success figures to continue under the new version of the firm, according to its newest member.

“It’s been a lifelong dream to practice law with my dad,” said Matthew, whose younger brother Daniel is an attorney with Butzel Long. “I cannot tell you how lucky I feel to have this opportunity.”