By Matthew AckermanMarch 17, 2022No Comments

(I know this is an eminent domain blog, but I thought I would write about something a little different for my first post.  For what it’s worth, at least my dad thinks it’s interesting.)

After graduating from law school, I clerked for a year on the U.S. Court of Appeals for the Fifth Circuit, which covers Texas, Mississippi, and Louisiana.  The following year, I did the same job on the Second Circuit, which covers New York, Vermont, and Connecticut.  When I discuss my clerkship experiences with other attorneys, their second question is often about the differences between the two clerkships.  (The first question typically is, “Why would you do two appellate clerkships?”)  Most people are surprised—as I was when I started my second clerkship—when I say that the clerkship experiences and circuits themselves were vastly different.  Each circuit has its own administration, procedures, schedules, personalities, and traditions.

As a simple (and visual) example, each circuit has its own formatting and style.  Here is the first page of a Second Circuit opinion: 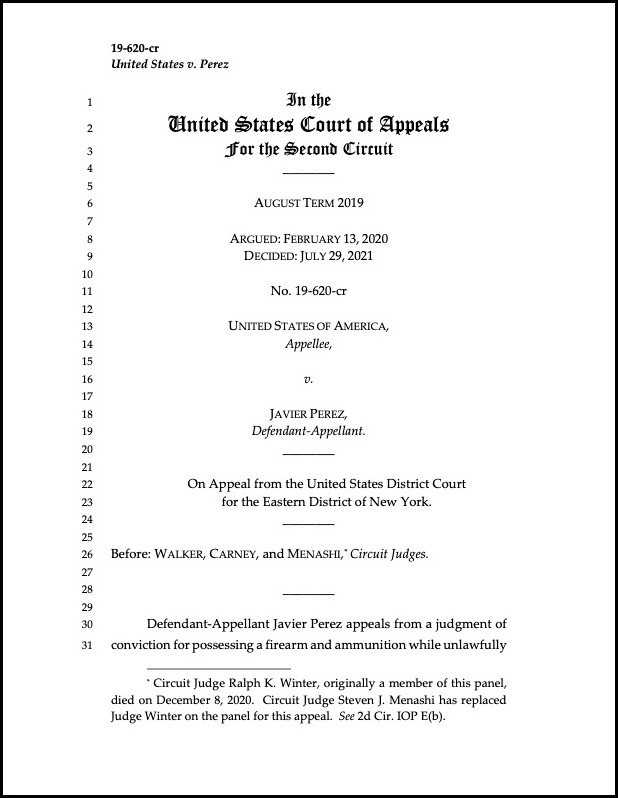 And here is the first page of a Fifth Circuit opinion: 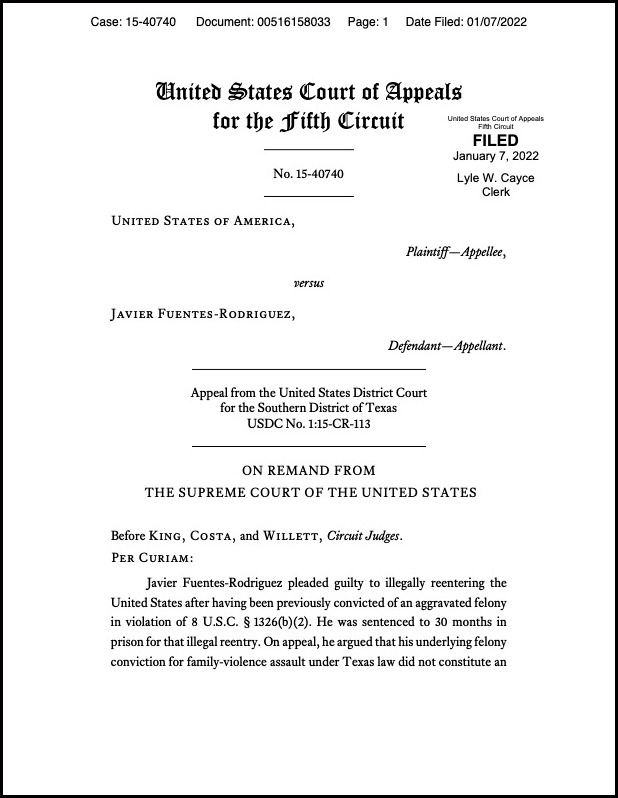 I slightly prefer the Fifth Circuit’s formatting, but both are light-years ahead of the First Circuit, which makes me wonder whether its judges are still using typewriters: 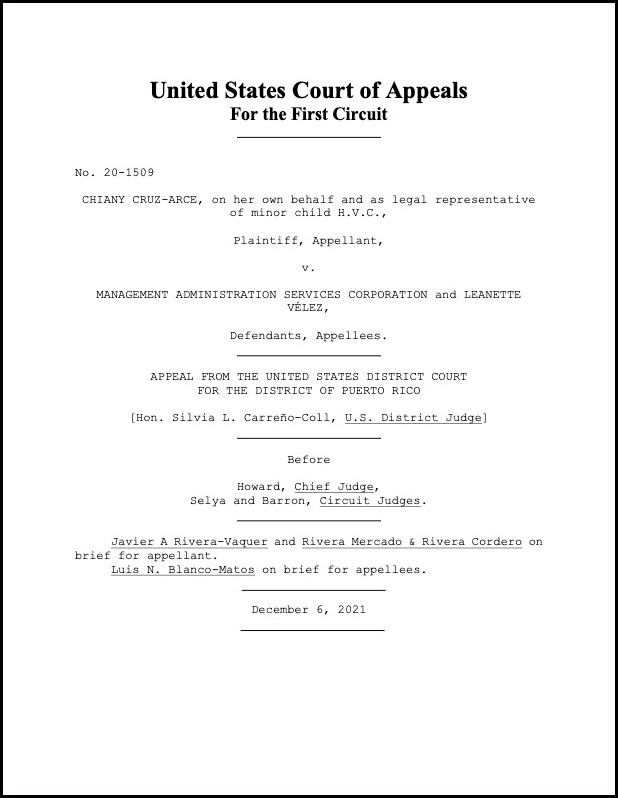 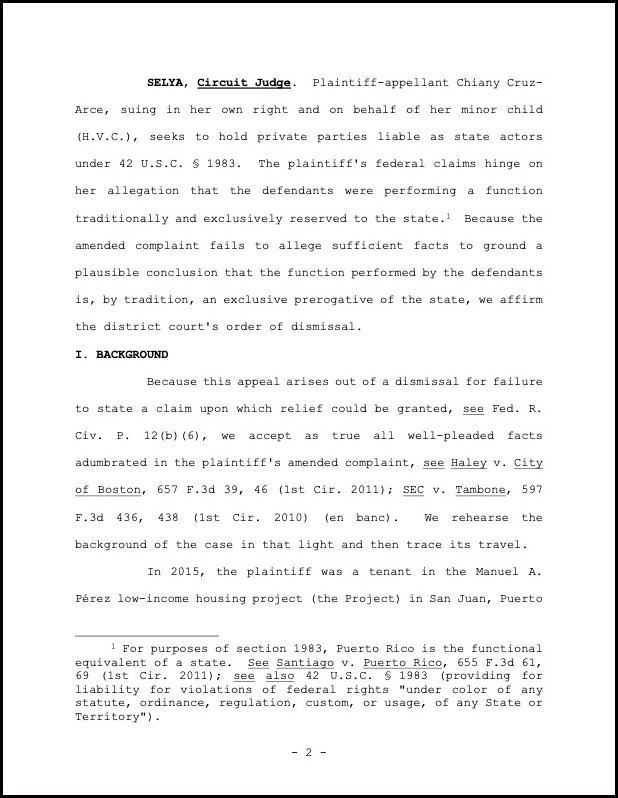 Yes, this is real.  Out of Microsoft Word’s hundreds of font options, the First Circuit for some reason chooses Courier.

This blog isn’t about formatting, though.  It is about a “circuit split” on a substantive issue in a hot-button topic, qualified immunity.  The two circuits I clerked on are on opposite sides of this circuit split, so I had a courtside seat (pun intended) to see the split in action.

I did not expect a circuit split on such a commonly litigated and hotly contested issue, so I looked up whether anyone had written about it.  To my surprise, although a few people had written about it, see, e.g., Kenneth Duval, Burdens of Proof and Qualified Immunity, 37 S. Ill. U. L.J. 135, 141 (2012) (reaching the opposite conclusion that I do below—i.e., that the burden should be on the defendant to establish qualified immunity); Aisha Green, Comment, Comparing Dadd v. Anoka County with Corbitt v. Vickers: Why Defendants Should Bear the Burden of Establishing Qualified Immunity in a Motion to Dismiss, 70 Am. U.L. Rev. 2091 (2021) (same), it had largely gone under the radar.

To understand the circuit split, you need to have a general understanding of qualified immunity, so that is where I will start.

Qualified Immunity:  Federal law provides a cause of action for individuals who have been “depriv[ed] of any rights, privileges, or immunities secured by the Constitution and laws” of the United States by a person acting under the color of law.  42 U.S.C. § 1983.  “Qualified immunity” shields government officials (sued in their “personal capacity”) from liability in these suits “insofar as their conduct does not violate clearly established statutory or constitutional rights of which a reasonable person would have known.”  Harlow v. Fitzgerald, 457 U.S. 800, 818 (1982).

Courts analyzing whether a government official is entitled to qualified immunity at the pleading stage must determine whether (1) the plaintiff alleged that “the official violated a statutory or constitutional right” and (2) whether “that right was ‘clearly established’ at the time of the challenged conduct.”  Ashcroft v. al-Kidd, 563 U.S. 731, 735 (2011).  “To be clearly established, a right must be sufficiently clear that every reasonable official would have understood that what he is doing violates that right.”  Reichle v. Howards, 566 U.S. 658, 664 (2012) (cleaned up).  “In other words, existing precedent must have placed the statutory or constitutional question beyond debate.”  Id. (quotation marks omitted).  “[C]ourts have discretion to decide which of the two prongs of the qualified-immunity analysis to tackle first.”  Id. (citing Pearson v. Callahan, 555 U.S. 223, 236 (2009)).

(For the sake of brevity, I will not discuss here the many related issues or criticisms of this doctrine, such as that it is “inconsistent with conventional principles of statutory interpretation.”)

The split:  Let’s get to the interesting part—the circuit split.

On the Fifth Circuit, the burden is on the plaintiff to overcome a qualified immunity defense by establishing a clearly established violation of a statutory or constitutional right.  Here are some sample rule statements:

Consider this framework in practice.  A prison inmate files a Section 1983 claim against a jail guard, who invokes qualified immunity as a defense to the suit.  The burden is then on the inmate to establish that the guard violated a constitutional or statutory right that was clearly established at the time of the alleged conduct.

By contrast, the Second Circuit places the burden on the defendant:

Return to the jail guard example.  On the Second Circuit, the guard would have the burden of establishing that his or her actions were either reasonable as a matter of law or that the right was not clearly established (more on this in a minute).

Based on my review, the Fifth Circuit’s framework appears to be the majority rule.  The Sixth, Seventh, Eighth, Ninth, Tenth, Eleventh, and D.C. Circuits all likewise place the burden on the plaintiff:

The Second Circuit is not entirely alone though:

Some of the other circuits are inconsistent.  Consider the Third Circuit.  In some cases, it places the burden on the defendant.  See, e.g., Jefferson v. Lias, 21 F.4th 74 (3d Cir. 2021) (“[T]he officer bears the burden of establishing his entitlement to qualified immunity….”).  And in others, it places the burden on the plaintiff.  See, e.g., Lozano v. New Jersey, 9 F.4th 239, 245 (3d Cir. 2021) (“A police officer is entitled to qualified immunity under § 1983 unless the plaintiff shows that the officer violated clearly established statutory or constitutional rights of which a reasonable person would have known.” (quotation marks omitted)); Morency v. City of Allentown, No. 20-3469, 2021 U.S. App. LEXIS 25133, at *14 (3d Cir. Aug. 23, 2021) (“For a plaintiff to prevail in such a suit, he or she must demonstrate that (1) the facts alleged show the violation of a constitutional right; and (2) that the law was clearly established at the time of the violation.”).

The Fourth Circuit straddles both sides of the circuit split.  It places the burden on the plaintiff to establish a constitutional violation and the defendant to show that the violation was not clearly established.  See, e.g., Stanton v. Elliott, No. 21-1197, 2022 U.S. App. LEXIS 2945, at *11 (4th Cir. Feb. 1, 2022) (“In the Fourth Circuit, we have a split burden of proof for the qualified-immunity defense.  The plaintiff bears the burden on the first prong, and the officer bears the burden on the second prong.”); Mays v. Sprinkle, 992 F.3d 295, 302 n.5 (4th Cir. 2021) (“Plaintiffs bear the burden of proof to show that a constitutional violation occurred.  But, at least in our Circuit, defendants bear the burden of showing that the violation was not clearly established, and they are therefore entitled to qualified immunity.”).  The Fourth Circuit is not entirely consistent on this point though.  In other cases, it places the burden for both prongs on the defendant.  See, e.g., Wilson v. Prince George’s Cnty., 893 F.3d 213, 219 (4th Cir. 2018) (“The burden of proving the affirmative defense of qualified immunity rests on the party seeking to invoke it.”).

Which approach is better?

At this point, it should be clear that a circuit split exists and that it runs deep.  That leads to an obvious question:  Which circuit has it right?

In my opinion, the Fifth Circuit’s framework (which places the burden on the plaintiff) is far superior.  It is more practical, aligns better with the theory behind qualified immunity, and preserves judicial resources.

Let’s start with the practical.  The Second Circuit’s formulation forces the defendant to prove the non-existence of clearly established law.  It goes without saying that a person should not be tasked with proving that something does not exist.  In other areas of law, courts employ burden-shifting frameworks to avoid that situation.  (Think, for example, about the federal standard for summary judgment or the McDonnell Douglas framework for discrimination claims.)

But this reasoning is also flawed.  Unlike traditional affirmative defenses, qualified immunity provides “immunity from suit rather than a mere defense to liability.”  Pearson v. Callahan, 555 U.S. 223, 231 (2009) (quotation marks omitted).  Part of the rationale behind the doctrine is to avoid “the general costs of subjecting officials to the risks of trial—distraction of officials from the governmental duties, inhibition of the discretionary action, and deterrence of able people from public service.”   Mitchell v. Forsyth, 472 U.S. 511, 526 (1985) (citation omitted).  “[E]ven such pretrial matters as discovery are to be avoided if possible, as inquiries of this kind can be peculiarly disruptive of effective government.”  Id. (cleaned up).  For the same reason, the Supreme Court has “repeatedly … stressed the importance of resolving immunity questions at the earliest possible stage in litigation.”  Callahan, 555 U.S. at 232 (quoting Hunter v. Bryant, 502 U.S. 224, 227 (1991)).  By forcing defendants to establish qualified immunity, the Second Circuit subjects defendants—who are supposed to be immune from suit—to the cost and trouble of litigation.

And, finally, I think the Fifth Circuit’s formulation helps preserve judicial resources by putting the onus on the litigant to point to clearly established law.  On the Fifth Circuit, the court can look at the plaintiff’s pleading and briefing, find that the plaintiff has not identified any cases establishing a right, and affirm the district court’s dismissal.  On the Second Circuit, the defendant is tasked with proving the non-existence of clearly established law.  Given the nature of this inquiry, clerks are forced to research circuit caselaw for something that may not exist.  With that said, the formulation should—at least in theory—not affect the ultimate question of whether a right is clearly established.  As the Ninth Circuit has explained, even where the “plaintiff bears the burden of showing that the rights allegedly violated were clearly established,” courts should resolve this “pure question of law” by “draw[ing] on [its] full knowledge of relevant precedent rather than restricting [its] review to cases identified by the plaintiff.”  Gordon v. County of Orange, 6 F.4th 961, 969 (9th Cir. 2021) (cleaned up).

One last point:  The Supreme Court has not provided any clarity on this issue.  In 1980, the Court wrote that “[s]ince qualified immunity is a defense, the burden of pleading it rests with the defendant.”  Gomez v. Toledo, 446 U.S. 635, 640 (1980).  But just four years later, the Court suggested the opposite: “A plaintiff who seeks damages for violation of constitutional or statutory rights may overcome the defendant official’s qualified immunity only by showing that those rights were clearly established at the time of the conduct at issue.”  Davis v. Scherer, 468 U.S. 183, 197 (1984).  Given the lack of guidance by the Supreme Court, it is not shocking that a circuit split has ensued.  Hopefully the Supreme Court will one day step in and apply the Fifth Circuit’s rule.